Fishing With The Administrative State

I'm slogging my way through "Is Administrative Law Unlawful", an excellent, though not exactly a page turner book. Short version, Administrative Law is both Unconstitutional and Unlawful ... there IS a difference, which I will TRY to unravel somewhat plainly when I review the book

In the meantime, the linked gives the sad story of the Administrative State making life miserable for a small commercial fisherman.

Federal law gives NOAA the power to force me to carry a monitor on my boat, but it doesn’t give the agency the power to make me pay for the monitor. If Congress had passed a law that allowed NOAA to force herring fishermen to pay for monitors, we could at least use our voices and our votes to check the lawmakers who’d voted for it. But since in this instance a federal agency has tried to do the same thing through an unconstitutional, unilateral power grab, we’ve been forced to settle the issue in the courts.

Why does the NOAA get away with expanding its power? In one word, Chevron.

"Chevron is a rule that tips the scales in favor of a particular result when a statute is unclear," Yale Law's Abbe Gluck has written of the principle. "In Chevron's case, the scales are tipped toward the agency's preferred interpretation."

If you follow the Chevron link, you will also find that Chevron gave us Obamacare.
One thing Obamacare certainly didn't do is reduce the amount spent on healthcare in the US.
If you go to the link and look at the chart, you see that up until 1970, the amount spent on healthcare seemed to be growing at a relatively similar pace to the population. Whole books are written on this contentious subject, and nothing lies like statistics. Why did this happen?
Most of what we "know" is provided by the Administrative State, and their friends in large corporations and the media. Covid, and the attacks on Trump have made it much more clear what has been happening for a long time, and increases to happen. We are fed a "narrative" that lulls most Americans into the idea that whatever the Democrats, Administrative State and media (basically a single entity) tell us is truthful and things are good, except for the constant threat of Republican extremism. 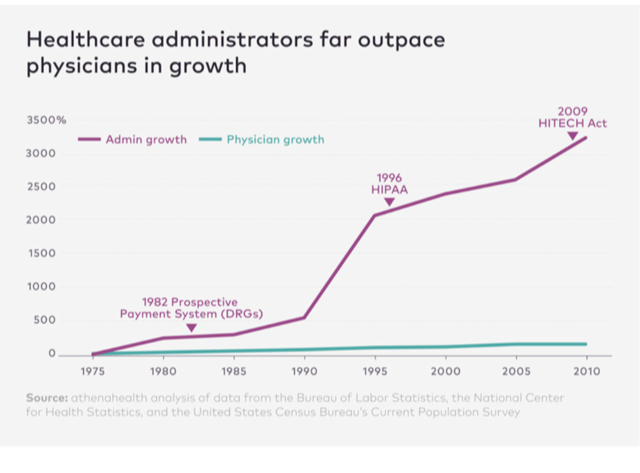 Once we had a Constitution that largely prevented and certainly curtailed much of this. With the overturn of Roe, there is a glimmer of hope that we may return to Constitutional government ... a SLIGHT glimmer.

Along with Stephan the fisherman from the top link, I would really like to believe that Americans will awake from their entertainment and entitlement slumber and realize that there is STILL no free lunch!