According to basically 100% of of European countries -- if you read the whole article, election integrity is critical to democracy.

When it comes to absentee voting, we Americans, accustomed as we are to very loose rules, are often shocked to learn that 35 of the 47 European countries—including France, Italy, the Netherlands, Norway, and Sweden—don’t allow absentee voting for citizens living in country. Another ten European countries—including England, Ireland, Denmark, Portugal, and Spain—allow absentee voting, but require voters to show up in person and present a photo ID to pick up their ballots. It isn’t like in the U.S., where a person can say he’s going to be out of town and have a ballot mailed to him.

Mexico believes you ought to know your vote actually counts.

...Mexico recently instituted strict reforms. Voters must present a biometric ID—an ID with not only a photo, but also a thumb print. Voters also have indelible ink applied to their thumbs, preventing them from voting more than once. And absentee voting is prohibited, even for people living outside the country.

Wow, with such harsh "voter suppression" measures, the number of people voting must have really dropped in those repressive countries.

Those who oppose election integrity reform here in the U.S. often condemn it as a means of “voter suppression.” But in Mexico, the percent of people voting rose from 59 percent before the reforms to 68 percent after. It turned out that Mexicans were more, not less, likely to vote when they had confidence that their votes mattered.

Democrats, the media, and the State Bureaucracy oppose any voted integrity measures in the strongest terms.

Here, for instance, is President Biden speaking recently in Philadelphia, condemning the idea of voter IDs: “There is an unfolding assault taking place in America today—an attempt to suppress and subvert the right to vote in fair and free elections, an assault on democracy, an assault on liberty, an assault on who we are—who we are as Americans. For, make no mistake, bullies and merchants of fear and peddlers of lies are threatening the very foundation of our country.” Sadly but predictably, he went on to suggest that requiring voter IDs would mean returning people to slavery.

The horror of it! Nearly all the people in Europe are living in SLAVERY! Just ask Joe (on one of the few days he is coherent).

What kind of "bullies, merchants of fear and peddlers of lies"  have suggested that mail in voting encourages (and has been demonstrated to) enable massive voter fraud? Well Jimmy Carter for one -- and though he is definitely a "peddler of lies", I really can't imagine anyone calling Jimmuh a "bully".

Sixteen years ago, in 2005, the Carter-Baker Commission on Federal Election Reform issued a report that proposed a uniform system of requiring a photo ID in order to vote in U.S. elections. The report also pointed out that widespread absentee voting makes vote fraud more likely. Voter files contain ineligible, duplicate, fictional, and deceased voters, a fact easily exploited using absentee ballots to commit fraud. Citizens who vote absentee are more susceptible to pressure and intimidation. And vote-buying schemes are far easier when citizens vote by mail.

Would you like it if your bank would allow cash withdrawls from your account without photo ID? How many times are you required to show a photo ID? Flying, increasingly buying liquor, shipping a package via UPS, checking into a hotel ... the list just keeps getting longer.
So we know that insuring voter integrity doesn't reduce voting -- it tends to INCREASE it because people know their vote counts.

Other than a history of voter fraud and a strong desire to continue and increase it,  it seems impossible defend measures like HR1. Therefore, the media mostly ignores what is actually in it, and merely repeats the obvious propaganda that it is racist, voter suppression and somehow a "return to slavery".
The linked short article is worth the read.
Posted by Bill at 2:56 PM No comments:

Joe Biden likes to say "expodentially" -- who knew?  Democrats looking human (stupid if Republicans do so) is something ignored by the Democrat media for obvious reasons - it would be simply WRONG to make lite of our glorious leader.

OTOH, everyone knew about "Bushisms" ... in fact, there was a calendar of them.

There was once a comedian named Norm Crosby that made a good living through malapropisms back when the nation had a sense of humor. I'm quite certain that this clip would be enough to get him Cancelled today.

Losing a sense of humor is a strong sign of "progress" toward totalitarianism. As "progress" proceeds, poking fun at potentates can become criminal.

The Order of Time, Carlo Rovelli

The link as per usual is to a more detailed professional review.

Most people are aware of Einstein's theory of relativity -- time is relative to your frame of reference.

An aside -- isn't it interesting that everyone seems to accept that Einstein's theory is a THEORY, even though is has been tested in a number of ways -- one being that using very accurate clocks, one "stationary" relative to the plane, and a very fast plane, it can be shown that "time" travels more slowly as "objects|" move faster.

I find that to be the useful takeaway from the Rovelli book.

... But in physics, once we start to look at what exactly the difference is between past and future, it’s extraordinarily slippery. In the past, the universe seemed to be in a very peculiar state. Physicists use the expression ‘low entropy’. So because there was this low entropy in the past of the universe, that’s the only source of difference between the past and the future. But low entropy is itself a slippery thing because it implies a state of order!

If the difference between the past and the future is just a natural disordering of things, the question becomes: why were things ordered in the past? Who ordered them? And this is still a mystery.

It reminds me of the quote from Spinal Tap member Nigel Tufnel that is inscribed on the wall at the Stonehenge visitors center which made me laugh out loud: "no one knows who they were or what they were doing ..."

There "seems to be a natural ordering of things" ... nobody knows why, or how. Religion is often derided as "the God of the gaps" ... but so is "science", a proffered replacement for religion. The set of things we don't "know" is much larger than the set if things we at least believe we do.

Largely, Coke (religion) has been replaced with Pepsi (science), and the marketers have largely made science  "the choice if a new generation".

All The Tea In China

The linked review covers the basics.

My biggest insight acquired from the book was how the English enjoyment of tea in which the water is boiled, killing microorganisms, and being a mild stimulant, may have been a significant  factor in England being more innovative and economically successful than nations whose favorite drink for enjoyment and killing the nasty little beasties was wine or beer, which are mild depressants.

One may be a bit more alert after a cup of tea vs a beer!

I find term "stole" to be a bit moralistic. "Industrial espionage", or mere natural "oh, I see this thing, I wonder how they do that" with various levels if copying, espionage, etc are as old as the first spears, knives, bows, etc.

Attempted copies at various levels are a constant in technology ... consider this shot of the US Space Shuttle vs the Russian Buran. Notice any similarity? 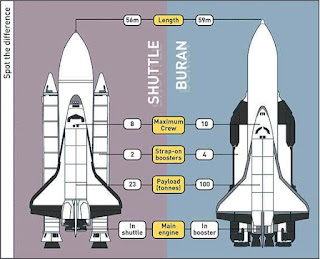 While the Chinese may have come out on the short end on tea, they are decidedly the experts in technology acquisition (industrial espionage) today!
Was the theft of the secrets of tea "the greatest theft of intellectual property in history" ?  Perhaps, but Ih would think that the theft of the secrets to create an H-bomb by the USSR, or the technical transfer of rocketry knowledge through the immigration / immigration by Germans like Wernher Von Braun allowed the US to reach
The book has at least for a bit made me revisit tea -- realizing (correctly) that it was black tea that I would prefer. Let the testing begin
Posted by Bill at 9:21 AM No comments:

FDA Says we only need to wait 75 years for independent review of often mandated jab.

Well, that is the one we took because my wife would lose her job if she wasn't vaccinated.

“If you find what you are reading difficult to believe—that is because it is dystopian for the government to give Pfizer billions, mandate Americans to take its product, prohibit Americans from suing for harms, but yet refuse to let Americans see the data underlying its licensure,” Siri said.

The Pfizer jab is the only one that has been approved by drug regulators. Approvals mean products have met a higher threshold of safety and effectiveness than those given emergency clearance.

We only experienced 6 weeks of really nasty coughs and fatigue from the jab. We had Covid last December, the jab was much worse.